to Repair and Preserve the Park's Historic Stonework

Awarded to the Friends

Monument Valley Park’s unique stonework is among the Park’s most valuable treasures.  Many of the stone features, such as the Geologic Column, were constructed for the Park’s opening in 1907.   Following the 1935 Memorial Day Flood, WPA workers built additional stone retaining walls, stone benches, stone bridges and stone entryways, including the 400-foot long Columbia Street Entrance.

The Conditions Assessment
Our project to repair the Park's historic stonework began in 2011 when we were awarded a $10,250 grant from the State Historical Fund to help pay for a conditions assessment of the historic stone walls and other stone features in the Park.  The assessment was completed in 2012 and included both the original stonework installed in 1907 and the WPA-era stonework added in the 1930s.

In 2012, the Friends were awarded a second State Historical Fund Grant in the amount of $35,000 to repair and preserve the unique Geologic Column located in the northern half of the Park.  Monies raised in our Give! Campaigns were also used to fund the repair work.  The repairs to the Geologic Column were completed in October 2014.

The repairs to the Columbia Street Entrance's stonework were completed in July 2017 and the repairs to the drainage system were finished in September 2017.   The repairs were funded by our third State Historical Fund grant that was awarded on Feb. 1, 2016 in the amount of $170,570 .  In addition to the grant funds, our Friends group will be contributing $64,000 in funds raised through our Give! Campaigns and the City of Colorado Springs is providing $20,000.  The 400-foot-long stone entryway was built in 1938 by the Works Progress Administration and is located in the northern half of Monument Valley Park. 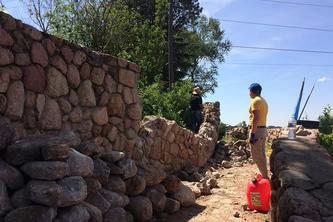 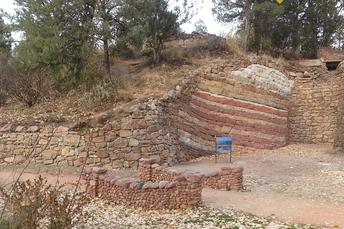